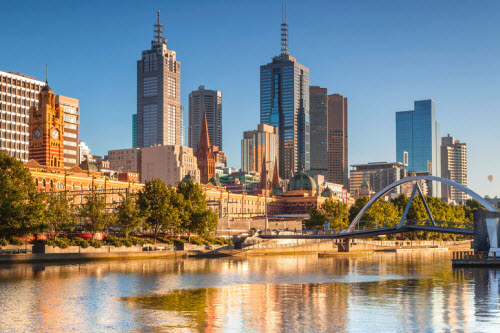 Discover affordable holiday packages to Melbourne from New Zealand. Located only 3 hours 45 minutes from Auckland, Melbourne is the ultimate weekend getaway destination for Kiwis. It's the "cultural capital of Australia" and is home to some of the best local art, films, and live music acts.

Why Melbourne is a Top Holiday Destination for Kiwis

From its historic monuments to modern malls, famous coffee and vibrant culture, Melbourne is renowned for effortlessly blending the past and present. With direct flights from Auckland, Christchurch, Wellington and Queenstown travelling to Melbourne is affordable and will take you only a few hours to arrive. While New Zealand is known for its wine regions, Melbourne still has something to offer intrepid connoisseurs. Head to the famous Yarra Valley and judge for yourself which country has the better wine. For foodies on a budget, Melbourne is a haven. You can pick up pizzas and burgers for under AUD 10, and a meal at a cafe should only set you back around AUD 15. It's arguably one of the cheapest cities to eat in Australia - especially if you love Asian food. Melbourne is home to Australia's largest mall, Chadstone and a plethora of boutique and antique stores. If you're looking to pick up local designer brands like Gorman and Alice McCall, make sure you check-in an empty suitcase. The city also has affordable wildlife activities for families, couples and solo travellers. For only AUD 15 you can catch a ferry to Phillip Island and witness the nightly penguin parade, visit the koala sanctuary and see the massive seal colony basking in the sun.

What are the best things to do in Melbourne?

Melbourne’s iconic Flinders Street Station opened in 1854, becoming Australia’s first train station. It's a favourite among travellers holidaying on Melbourne packages thanks to its stunning architecture that feels like a step back in history. Walk around the station to take in its grand designs and see the station’s famous clocks that are a popular meeting point for locals.

Hosier Lane (and other laneways)

There’s no shortage of cool laneways to explore while visiting Melbourne, and the most famous is Hosier Lane. This colourful laneway showcases works from both prominent and up-and-coming street artists. The street art changes often, so it will feel like a new experience even if you’ve been to Melbourne before. Other laneways to have on your radar when you book Melbourne holiday packages are AC/DC Lane, Hardware Lane, and Degraves Street.

Head to the Royal Botanic Gardens while holidaying on Melbourne packages to swap the bustling city for calming nature. You’ll see plenty of Australian plants displayed around the gardens, as well as a variety of exotic and international flora. Explore the walking trails that wind through the gardens and make sure to visit the Shrine of Remembrance in the gardens’ southeastern corner.

What are the best places to stay in Melbourne?

Are you looking to stay at the centre of all the action? Browse Webjet’s selection of hotels and accommodation in Melbourne’s CBD. It’s home to many of Melbourne’s most famous attractions, including Flinders Street Station, St. Paul’s Cathedral, Chinatown, and Hosier Lane. You’ll also find some of the city’s best shopping along the Bourke Street Mall and an excellent selection of cafes and restaurants sprinkled all over the centre. The CBD is walkable and well-connected by public transport, making it an excellent base for your explorations while visiting Victoria on Melbourne holiday packages.

Consider a base in St Kilda while booking your Melbourne accommodation and flight packages if you’re interested in the laid-back coastal side to the city. St Kilda is a quick tram ride from the CBD, but its bohemian atmosphere is much different to what you’ll see in the centre. Spending time on the beach is a must-do, particularly if you book Melbourne holiday packages for a summer getaway. Other attractions include Luna Park, St Kilda Botanical Gardens, and St Kilda Pier where you’ll spot fairy penguins at sunset. Visitors holidaying on Melbourne packages can also enjoy plenty of restaurants and cafes in St Kilda and some of Melbourne’s best nightlife along nearby Chapel Street.

Fitzroy is a trendy neighbourhood northeast of the CBD. It’s just a stone’s throw away from the central attractions but with fewer tourists and a more laid-back atmosphere. It’s teeming with quirky bars and cafes, vintage boutiques, and some of Melbourne’s best laneways and street art. Fitzroy is also the centre of Melbourne’s vegan and veggie scene, making it the perfect spot for meat-free travellers who book Melbourne holiday packages. Have a look at hotels and accommodation in Melbourne’s cool Fitzroy neighbourhood if you’re interested in enjoying the city like a local rather than a tourist.

What is the best way to get around Melbourne?

Melbourne boasts one of Australia’s most extensive public transport networks, so you’ll have no trouble getting around by tram, train, and bus while holidaying on Melbourne packages. Hop on the SkyBus after arriving into Melbourne Airport. It travels to Southern Cross Station in the CBD, arriving in 22 minutes without traffic. You can also catch the St Kilda Express from the airport to reach hotels and accommodation in Melbourne’s southern suburbs.

Riding the tram is the most popular way to get from place to place while holidaying on Melbourne accommodation and flight packages. There are 24 lines reaching more than 1,700 stops around the city and suburbs, including a Free Tram Zone in the CBD. Travellers visiting Victoria on Melbourne holiday packages can also catch the number 35 heritage tram for free, which offers an informational commentary as it loops around the city.

Trains are another option while holidaying on Melbourne packages. There are 15 lines that offer service to 218 stations between the city and outer suburbs. Each train line passes through the city loop, where you’ll find the highly-trafficked Flinders Street and Southern Cross stations.

Are you looking to visit a spot that’s not accessible by tram or train? Melbourne also has 346 bus routes around the city and suburbs.

Hiring a car is the best way to see more beautiful areas of Victoria outside the city. Reserve a car with Webjet while booking your Melbourne accommodation and flight packages. Use the car to visit spots like Great Ocean Road, Mornington Peninsula, and Wilsons Promontory National Park.

What to know before you go to Melbourne

1. Money: The official currency is the Australian Dollar. There are plenty of ATMs located around the city, and you'll get a better exchange rate by withdrawing cash once you arrive.

5. Weather: The best time to visit Melbourne is between September and November and marc and May. You'll find better airfare rates, temperatures will still be warm and you can enjoy the cities top sights without the crowds. The summer months (December to February) are the busiest and June to August is Melbourne's quiet winter season.

6. Getting Around: Take the free yourist shuttle bus that goes around the city. it runs from 10:00am to 4:00pm and goes past some of Melbourne's top attractions. There's also a free tram that goes through the business district and Docklands from 10:00am to 6:00pm.

7. Drinking Water: The tap water in Melbourne is safe to drink.

8. Wi-Fi: There is free and fast public Wi-Fi available in the city centre. All you need to do is select "VicFreeWifFi' and oyu can use 250MB per device per day.