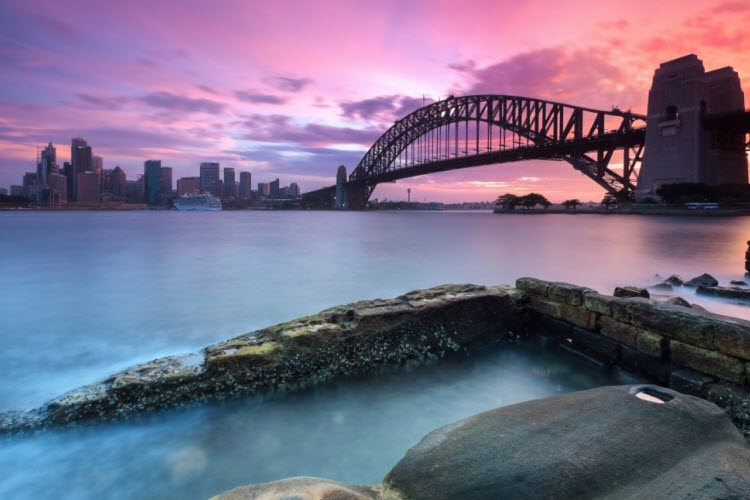 Discover cheap holiday packages to Sydney from New Zealand. With a direct flight time of only 3 hours 45 minutes from Auckland, it's one of the most affordable and closest holiday destinations for kiwis.

Don't overwhelm yourself with trip planning. Keep things simple by booking a flight and hotel package deal. Webjet has exclusive package deals that include cheap flights to Sydney and hotel stays for the duration of your stay. Let us do all the hard work and find the best holiday package deal for your trip to Sydney from New Zealand. .

Why Sydney is a Top Holiday Destination for Kiwis

Sydney is the largest city in Australia and is surrounded by iconic beaches, world heritage sites and world-class wine regions. With direct flights from five of New Zealand's international airports, it's the most inexpensive ways to get to Australia, and it's a huge time-saver. Home to warmer weather and some of the most famous beaches in the world, Kiwis flock here to worship the sun gods and ride some waves. On a budget? Visit the free museums, attend a "What's On Sydney" event, and go to a backpacker bar for AUD 4-7 beers. It also has something to offer every kind of traveller. Families will have plenty of kid-friendly hotels to choose from, and there are more than enough activities to keep the little ones busy. Adventurous couples and solo travellers can learn how to surf, kayak to Shark Island or go snorkelling in Gordon's Bay. There's also a range of boutique accommodation with epic views of the city's famous skyline. Foodies will also be spoilt for choice. Sydney has both delicious and affordable food for frugal backpackers or luxury travellers wanting a first-class dining experience. Sydney's major drawcard for any traveller remains its world-famous harbour. Located near the iconic Sydney Opera House, Harbour Bridge and Luna Park, it's an extraordinary landmark that deserves a spot on any Sydney bucket list.

What’s on in Sydney?

Visitors who book Sydney holiday packages during Vivid Sydney will get to see the most famous landmarks in a different light. Neon light installations accompanied by musical performances pop up in places like the Opera House, Circular Quay, and Darling Harbour each evening for three weeks. Festival-goers can also enjoy a programme of workshops and seminars all about how creativity can bring about change in the world. Attend Vivid Sydney by booking your Sydney accommodation and flight packages for travel in August.

There’s no better time for foodies to book Sydney packages than during Good Food Month between early October and early November. Internationally renowned chefs head to the city to run workshops and serve up some of their specialties. Restaurants all over Sydney also reveal special multi-course menus that are only available during Good Food Month. The Night Noodle Markets is another can’t-miss element of the event. Hyde Park turns into a Southeast Asian-inspired hawker centre made up of food stalls specialising in different noodle dishes.

Sydney holds one of the largest New Year’s Eve celebrations in the world, so you can’t go wrong booking Sydney holiday packages during this time if you love to ring in the new year in a big way. Small events are held throughout the day on 31 January, such as live music, aerial displays, and Aboriginal ceremonies. It all culminates with a massive fireworks display over Sydney Harbour once the clock strikes midnight. Get to the harbour early to secure a viewing spot in places like the Royal Botanic Garden and Barangaroo Reserve. Just be sure to book your hotel and accommodation in Sydney well in advance as this is one of the busiest times of year to visit.

What is the best way to get around Sydney?

Public transport is widely available, starting from the moment you arrive into Sydney Airport. Hop on the Airport Link train, which will zip you to Central Station in 13 minutes. Another option is to hire a car with Webjet while booking your Sydney accommodation and flight packages. Pick the car up from the airport, and use it to enjoy day trips to places like the Blue Mountains and Grand Pacific Drive.

Eight train lines travel through the CBD and extend into the inner and outer suburbs of Sydney. Visitors holidaying on Sydney packages can even catch the train as far as Katoomba in the Blue Mountains and Heathcote in Royal National Park.

Sydney’s ferries aren’t just convenient – they’re also an excellent way to see the harbour while visiting NSW on Sydney holiday packages. There are nine ferry routes, and the majority operate out of Circular Quay in the CBD. Popular spots to reach by ferry include Manly Beach, Taronga Zoo, and Darling Harbour.

Are you looking to go somewhere that isn’t accessible by train or ferry? There are more than 600 bus routes around the city and suburbs that come in handy while holidaying on Sydney packages.

What is the cost of visiting Sydney?

Hiring a car is useful if you’re looking to venture outside the city while visiting NSW on Sydney accommodation and flight packages. You can book a rental car through Webjet from about $40 NZD per day. Public transport is also readily available around the city and suburbs. The Airport Link train costs $14.90 AUD ($15.70 NZD) while the fares on city trains, ferries, and buses vary based on distance travelled. Train fares start at $2.50 AUD ($2.60 NZD) and ferry rides start at $6 AUD ($6.30 NZD). Paper tickets are available, but visitors holidaying on Sydney packages will save money with an Opal card. Cards cost $10 AUD ($10.55 NZD) but also come pre-loaded with a $10 AUD credit.

Are you booking Sydney holiday packages with a tight budget in mind? There are plenty of free activities to add to your list like Bondi Beach and the Bondi to Coogee coastal walk, Royal National Park, and the Museum of Contemporary Art. The Harbour Bridge Climb is an iconic attraction if you’re looking to do something extra special while holidaying on Sydney packages. Adult tickets start at $198 AUD ($208.70 NZD). There’s also a great view from the Sydney Tower Eye, which costs $24.80 AUD ($26.10 NZD) to visit.

What to know before you go to Sydney

1. Money: The official currency is the Australian Dollar. There are plenty of ATMs located around the city, and most sotres, restaurants and hotels will aceept Mastercard and Visa.

5. Weather: The best time to visit Sydney is in November and March to May. The weather will still be warm, but you'll miss the high season crowds and prcies. Airlines also tend to have cheaper rates during these shoulder seasons, making it a more affordable time for Kiwis to visit.

6. Getting Around: The best way to get around Sydney is with the train. The City Circle line stops by a number of the city's landmarks and you'll get to miss the notoriously grid-locked traffic. .

7. Drinking Water: The water in Sydney is safe to drink from the tap.

8. Wi-Fi: Wi-Fi in Sydney is slow and expensive. If you are budget-conscious and need to get online, head to a nearby Maccas (McDonald's) and use theirs for free.